Busybike, the cargobike specialist in Nijmegen 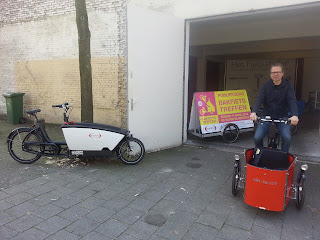 Busybike is the official dealer of more than 10 brands of different types of cargobikes, established in 2012 in Nijmegen. But not only that, it’s also a company that develops and innovates cargobike products and accessories.
I spoke with Busybike’s founder and owner Wibe Graafsma, professional database developer, avid bike technician and an enthusiastic innovator.

- Could you give us a short overview of the company up until now?
Wibe Graafsma: We started 4 years ago as a cargobike shop, mainly for family usage. Very soon we started creating bike boxes for brand-name producers and our own bicycle trailers. I expect that from this year on 50 % of our sales will be our own products – boxes, coolboxes and trailers.
We also offer bike insurance. Every cargobike owner takes it, although they get stolen extremely rarely. 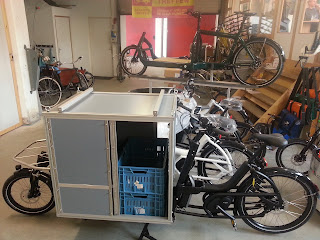 - As far as I know, Busybike is one of the most important sponsors and partners of the International Cargo Bike Festival almost from the very beginning?
W. Graafsma: You’re right. In addition to that, I created the English-language website for the festival. After that we’ve been having around 10 thousand visitors per month from all over the world.

- What kinds of products do you offer?
We have a wide range of products, from transport bikes in general, to business and family cargobikes. Even dog cargo bikes, with special doors so that a dog can easily enter and exit.

- Tell us something more about your inventions.
Our own inventions include bike boxes, trailers and coolboxes with passive cooling – one needs to use ice packages or dry ice.
With our trailer you can turn your regular bike to a cargo bike. It’s light, functional and strong trailer, ready for daily usage. Plus it doesn’t take too long to assemble it.
The container clicksystem, however, is still a prototype, not in mass production yet. The idea behind it is to develop a vehicle accessory that can be used by small companies that cannot afford a different bicycle for each purpose, so that they can easily switch the box they need for a specific situation. 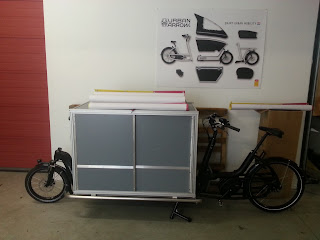 - What’s your customer range?
From restaurants and cafes to governmental organisations. Recently a governmental organisation from Belgium bought a cargobike that they use to employ the people with special needs who deliver the packages with cargo bikes.
The strangest usage of a cargobike I ever saw was when someone turned the cargo part into a complete toilet, so that people can use a toilet on the street. I also learned about wedding and funeral service done with a cargobike.
Unfortunately, cargobike market in the east of the Netherlands is not so big, so we mainly export our products to Belgium, Germany, Sweden, Italy…

- What could cities and states do to promote and support the usage of cargobikes?
Infrastructure is the most important and Dutch cities are doing a lot for it. German cities vary from horrible to almost perfect.

- How hard is it to ride a cargobike, especially the one with such a huge bike box?
It differs according to the size of the cargo. XXL could be a bit too large, although it is the one that’s sold the most. It can take up to 125 kilos and a company in Antwerp is using it to transport medicines. 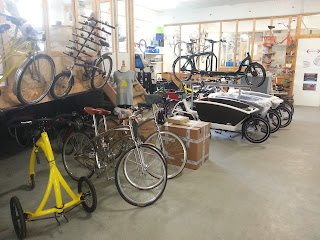 - How about the price range?
The price of a cargobike is somewhat high. The cheapest ones are around 1700 euros, mid-range are around 2500, and some, especially those with electric pedal assist, go up to 5000 euros.
But in the long run the cargobike pays off compared to a car. It’s hard to calculate it precisely, so I can illustrate it with an example. The company that is now using a cargobike to deliver medicines, was before using a car. At a certain moment they were obstructed by roadworks in front of their building, so they decided to try it with a cargobike. Of course they were able to do it. Later on, it became obvious that bikes are on average 1.5 hours faster on daily basis.
With regard to family bikes, nearly all of our customers are making 1500 km per year, some even 4500 km. The majority rides with their 2 or 3 children. Otherwise they would have to use the car. Their experience also shows that they are faster compared to cars. Plus they are healthier, don’t pollute the environment, and can communicate with their children easier.

- Is maintenance of cargobikes different from “normal” bikes?
It’s almost the same. Cargobikes basically have normal bike parts. But most of the customers don’t want to bother with that so they bring their bikes once a year to me to check them. 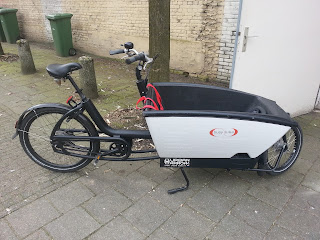