Ton Haex of Peer Producties will be representing the LESS CAR MORE GO  project and capturing video for the documentary at the International Cargo Bike Festival and CycleLogistics Federation Conference in Nijmegen!

The Kickstarter page is full of new content, information on the project and some super rewards. Check it out, back LESS CAR MORE GO, and please share!
Help make the best cargo bike documentary possible!
GO GO GO!
Posted by Jos at 9:49 PM 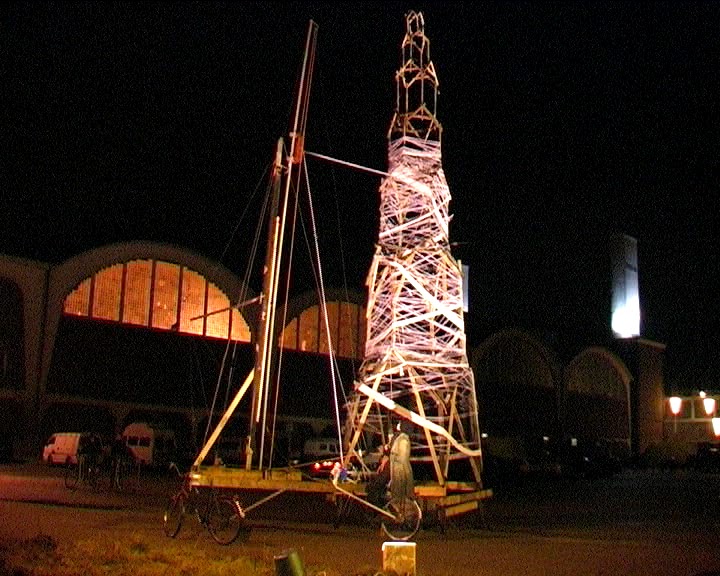 The key principles in the development of my work: to invent a structure and to build it, the structure eventually builds off almost automatically like some kind of play. Some structures are build off by the public (becomes involved), other already build structures interact with reactions of spectators. 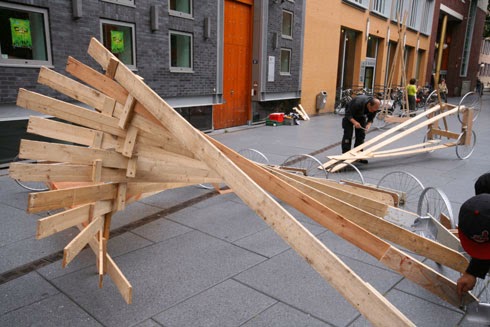 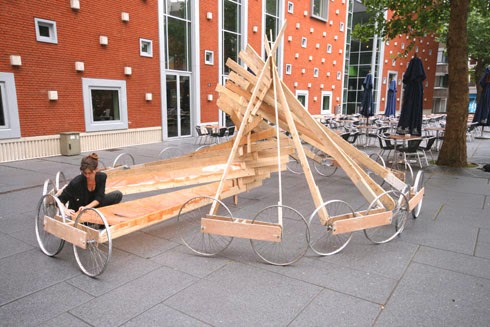 The build structures are remarkable because they seem to come from a different time or seem to descend from far beyond our society. The actions and gestures of these structures are absurd and grotesque, and contrast with the actions of everyday life. 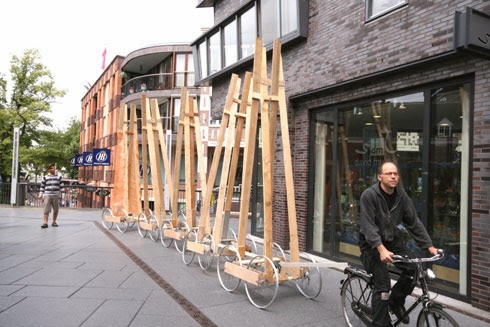 Rob uses everyday objects and materials from which he strips off their coating and then decompose them into new structural elements. The origin of the materials remains as visible as possible as a historical backing. 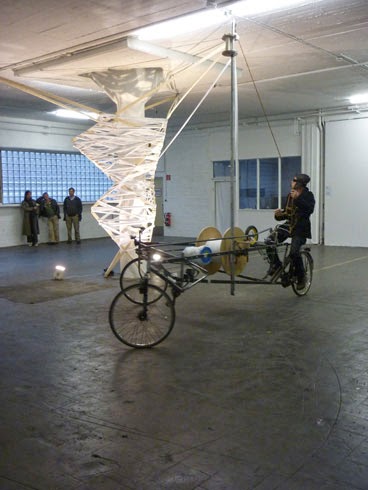 A part of my vocabulary is the bicycle and the whole world of it. A part of that world is a statement against the established large scale oil based polluting transport systems. In my case as an inventor I design the vehicle tailor-made for my specific transport issues; Of course is the wow and fun factor very important in the design; the recycling* is of extreme importance. The unregulated vehicle restrictions make it possible to just drive my creations and inventions around; My everyday-transport is like an exhibition.

Cycling in Nijmegen by Bicycle Dutch

Bicycle Dutch is a blog by Mark Wagenbuur about cycling in the Netherlands. Some of his many blogposts are about Nijmegen. I list them here so you'll get an impression of cycling in Nijmegen. When you get here for the International Cargo Bike Festival you might want to cycle some of the cycle paths yourself.

The most recent blogpost about Nijmegen is about 'The Little Green One', a new cycle bridge right across the river Waal from where the International Cargo Bike Festival takes place. 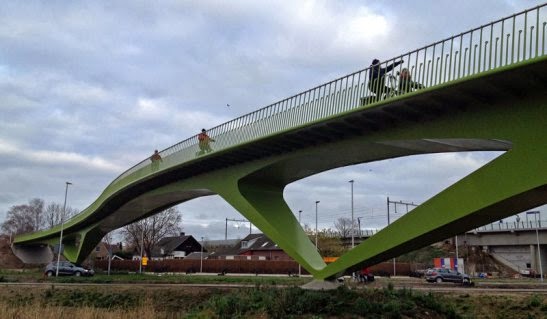 On Sunday 24th of November 2013 we celebrated the opening of the new bridge 'De Oversteek' (The Crossing) with a Car Free Sunday in remembrance of the car free sunday 40 years ago in 1973-1974, because of the oil crisis. The International Cargo Bike Festival takes place under the arches of De Oversteek. 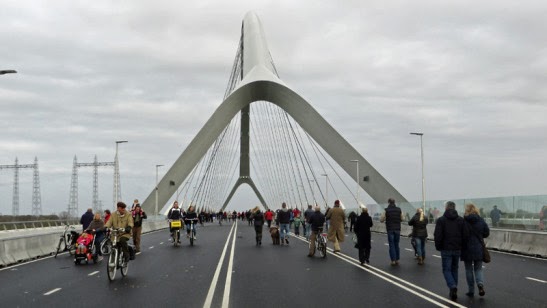 On the 15th of May 2014 it will be 10 years ago that the cycle path 'De Snelbinder' was constructed. This 750 metric tons weighting cycle path was attached to the existing railroad bridge. 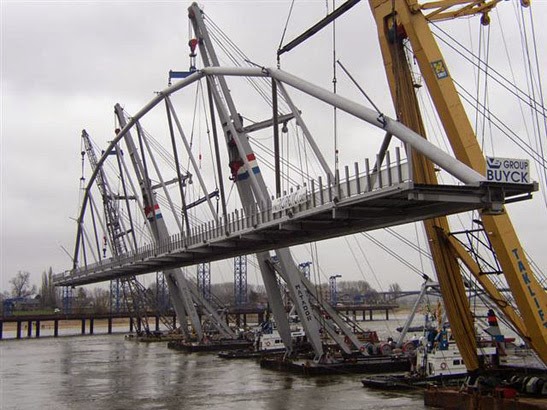 Bicycle Dutch recorded the opening of the new fast cycle route from Nijmegen to Beuningen on 7 April 2013, which also runs along De Vasim, togeher with last years Cargo Bike Festival 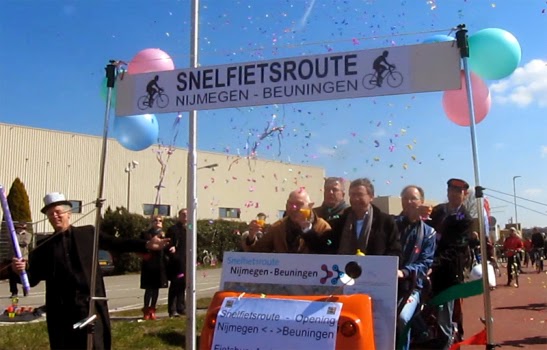 Two older blogposts from 2009 show some general impressions about cycling in Nijmegen and some more 'hilly' routes, 'the Dutch mountains', near Nijmegen. 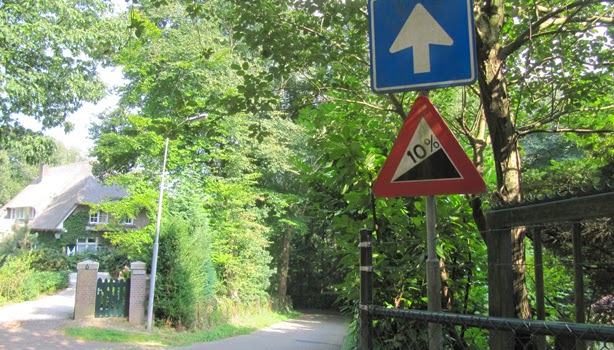 See you in Nijmegen!

And ofcourse BicycleDutch posted a blog about the International Cargo Bike Festival 2014 ! 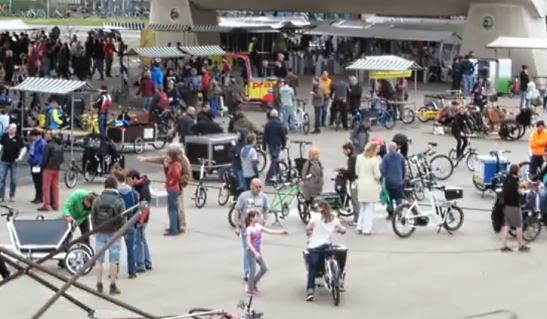 The blogpost of 29 May 2014 about the new bridge 'The Crossing' shows that not all the cycling infrastructure is that great. At least the Dutch think it is not that great, because we don't consider staircases with a gutter for bicycles really a proper and bikefriendly solution. 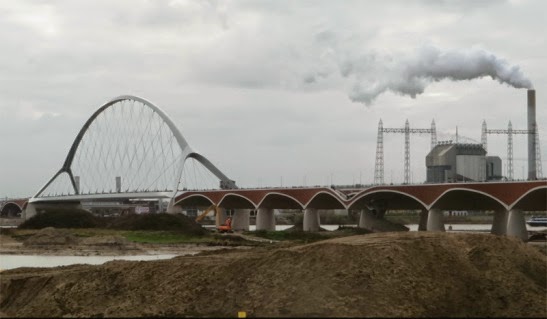 Also check the comments at the different blogposts because they add great information.

Shirley Agudo is an American photographer and author from Pennsylvania who has been living in the Netherlands for over 15 years. Fascinated by the Dutch bicycle culture, she devotes much of her time to showing the rest of the world what it’s like to live in a country that is immersed in cycling in every way, shape and form. Her aim is to help other countries become more cycling-friendly. 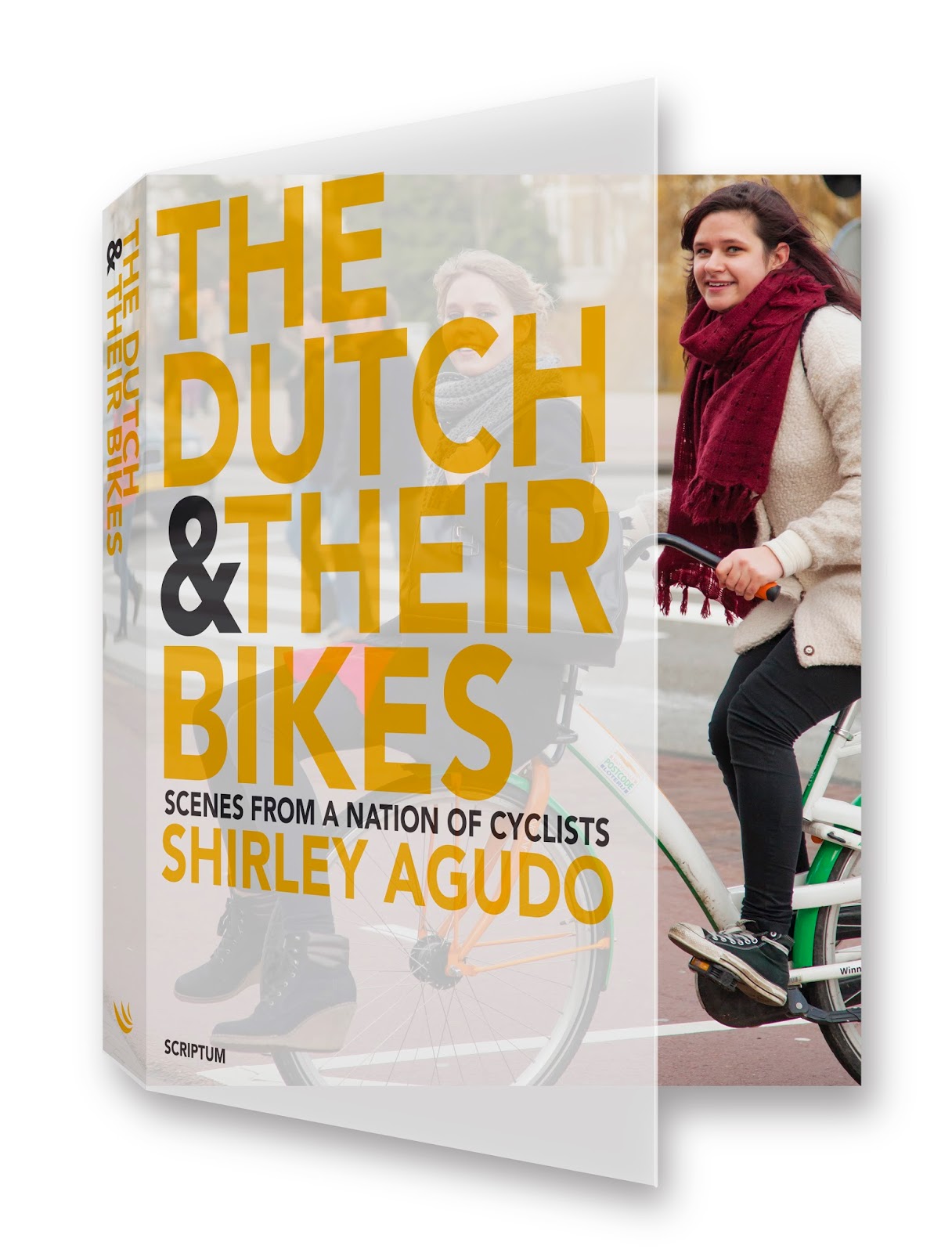 Shirley Agudo will be at the International Cargo Bike Festival and sign her new book. "The Dutch & Their Bikes".  She captures the essence of the world’s most cycling-friendly country, the Netherlands, in her fascinating new collection of almost 700 photos. It’s a privileged and inspiring look at a culture that lives and breathes cycling.

What people say:
“The Dutch & Their Bikes is a compelling collection of images about our nation of cyclists. Amsterdam’s reputation as ‘the world’s best cycling city’ is certainly true, and Shirley Agudo brings it all to life.”
Eberhard van der Laan, Mayor of Amsterdam

You can pre-order the book and it will be waiting for you at the International Cargo Bike Festival in Nijmegen. The price is 29,90 euro. Just send an e-mail to jos @ fietsdiensten.nl

The Dutch & Their Bikes: Scenes from a Nation of Cyclists, is Agudo’s sixth book. Her previous books are: Bicycle Mania Holland (her first volume of photos on the same topic); Fodor’s Holland (Random House); Hot Pink; Network Your Way to Success (with C. Ruffolo); and Here’s Holland (with S. Gazaleh-Weevers and C. Moser). 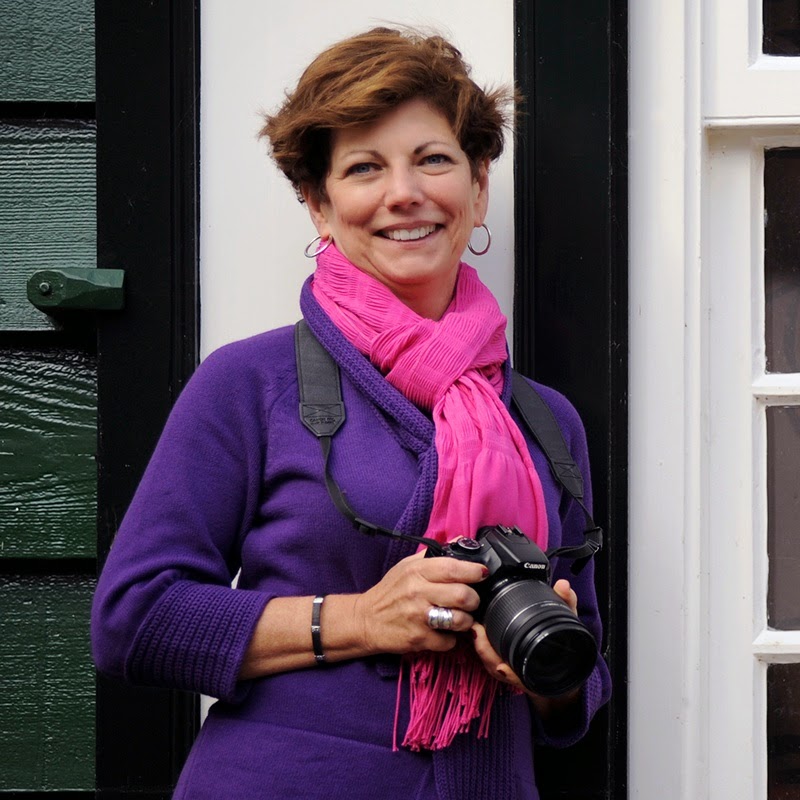 www.shirleyagudo.com
Posted by Jos at 3:22 PM

We are delighted that we can show a splendid chandelier of the bicycle chain artist LOLO PALAZZO. 12 & 13 April she will be exhibiting at the International Cargo Bike Festival in Nijmegen. 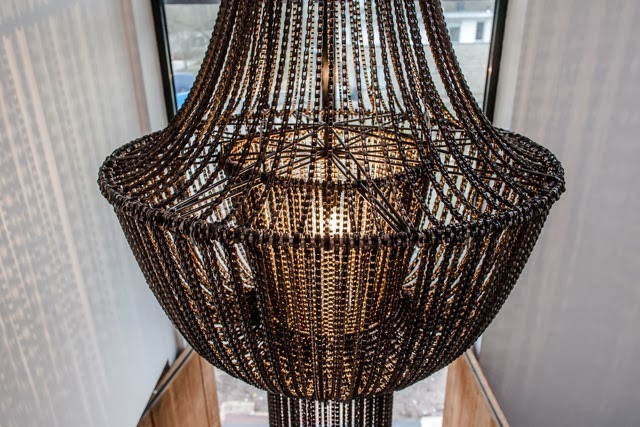 Unfortunately the artist herself can not be present in Nijmegen, because she is at the Salone de Mobile in Milano. 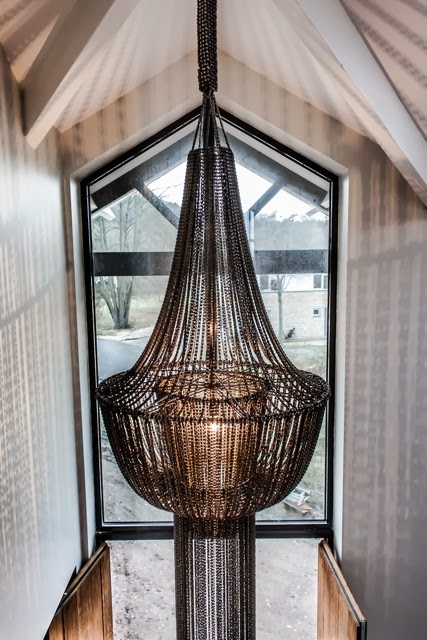 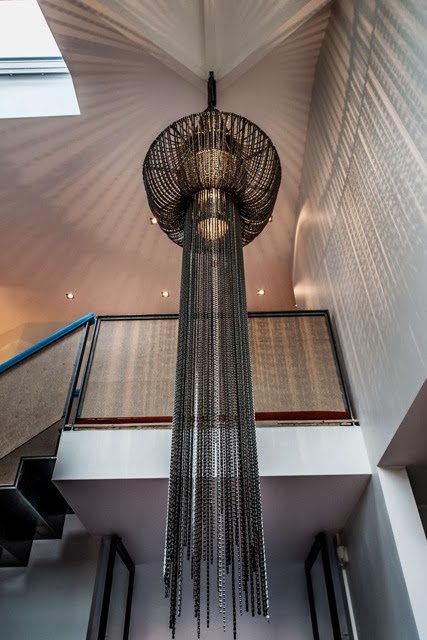 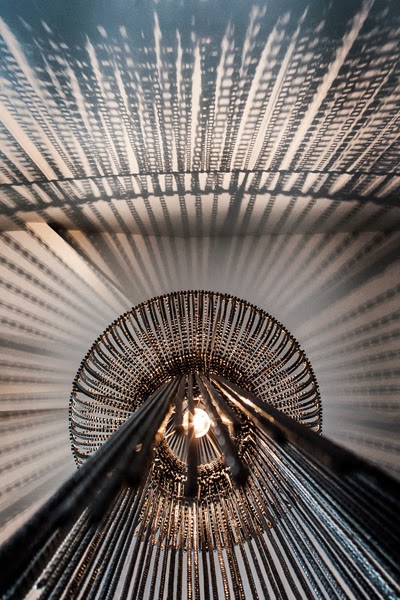 
And this is the chandeliers that has been made for the Cargo Bike Festival. It is 2.80 meters long and is made of about 300 meters of recycled bicycle chains.

For more information check out the website LOLO PALAZZO

The Bakfiets - the next big thing in worldwide urban logistics!

Hungarian news portal Index.hu will be at the ICBF2014

Ferenc Bakró-Nagy of Index.hu and his colleagues will come to the International Cargo Bike Festival to shoot a video about the festival and the hungarian participants: Hajtás Pajtás Kft, Kantaa, Hajtás Pajtás // Bringabarát, and Hajtás Pajtás Bicycle Messengers Company. Index.hu is the leading hungarian news portal with over 1.3 million readers per month, read by hungarians from Romania, Slovakia and UK as well.

You can read more about index.hu at wikipedia.

Ferenc is an urban cyclist activist and co-organizer of hungarian Critical Mass. The two main organizer of Critical Mass Budapest, Kükü and Sinya, are going to be at the Cargo Bike Festival in Nijmegen as well.