Every year there is an occassion at the International Cargo Bike Festival to sing the Cargo Bike Song.
In 2016 Johan Erlandsson practiced the Dutch version of the song and sang it in DE Vasim riding the Velove Armadillo together with Ron Vervuurt.
Allways a surprise who is going to sing it. Will you this year? 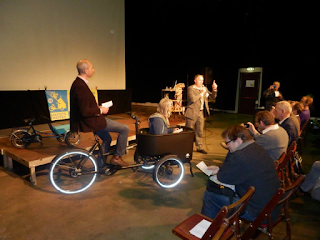 Looking forward to the performances of this year!
Posted by Jos at 3:01 PM

Carvelo2go, a project established in 2015 and supported by the Swiss “carvelo” cargo bicycle initiative, was the world’s first electric cargo bike-sharing scheme. The more than 2600 users who have already registered can hire electrically-assisted cargo bikes by the hour in a number of Swiss towns, by visiting the carvelo2go website. Currently the service is available in Basel, Bern, Vevey and St Gallen, but in June and July 2017, Zurich, Winterthur, Baden and Lucerne will also be added. 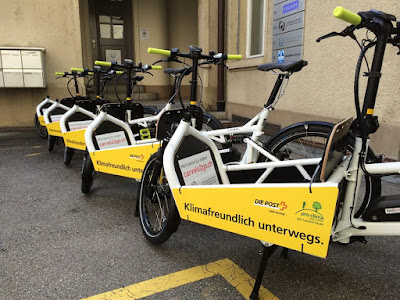 The scheme is operated by the Mobility Academy, part of the TCS (Touring Club Schweiz). Around 60 bikes are hosted by local shops, such as bakeries, pharmacies, book shops or bars. By involving local shops as hosts, where users can pick up the battery and key, carvelo2go provides easy access whilst minimising investment in infrastructure such as charging stations. Users pay in advance at the shop and return the bike, battery, and key once the trip is made.

RIPPL is powered by Topsector Logistiek
Posted by Tom Parr at 11:24 AM