A volunteering marathon in Nijmegen


(Ivan Podraza is a cycling activist and a lawyer from Osijek, Croatia and a European Law Master’s student, Human Rights and Migration track, at Radboud University Nijmegen) 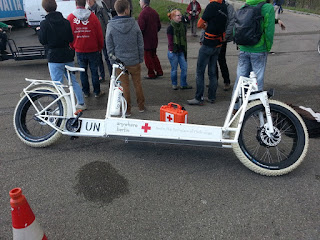 Studying abroad is not only about studying and a travelling, it’s also a great opportunity to volunteer - to donate some of your free time and energy, and to get something in return – to grow as a person, to acquire some experience and knowledge, to broaden your network, to explore some future opportunities and to integrate better into society. Oh, I almost forgot, volunteering is fun, plus the organizers feed you very well (usually, ha-ha) and you are almost always given some valuable memorabilia such as t-shirts that will remind you of all the good time you had.
I decided to have “a volunteering marathon” at two festivals in Nijmegen during April. One of them was International Cargo Bike Festival 2016 and the other was Groene Week (Green Week) festival of sustainability. Here I’d like to share my experience on volunteering at ICBF and here you can read my experience on volunteering at Groene Week festival as well.
I hope to motivate others to do the same.
Participating at ICBF was a must for me
Since I’m a cycling activist, the most natural thing for me was to participate in the International Cargo Bike Festival, probably the largest cargo bike festival in the world. I already knew the organizer Jos Sluijsmans from before, since we’ve met during a cycling festival in Croatia’s capital Zagreb several years ago, so it was easy to contact him.
Come to think of it, it was super interesting for me to see the festival from another perspective, because I already have experience as a director of a similar eight-day festival BikeMyDayS which was organised in my hometown Osijek and co-financed by European Commission within their campaign of sustainable transport “Do the Right Mix”.
Socializing and networking
This two-day cargo bike festival was a perfect opportunity for me to meet people from the cycling community not only from Nijmegen and the Netherlands, but also around the world. Even before it officially started, I had helped by putting up the banners on several key locations in the city and also by interviewing some of the participants.
During the final preparation day on Friday the 15th I got introduced to the team of volunteers – all of them were Dutch. And although the Dutch of every age and walk of life speak English very good, they spoke Dutch between themselves, so it was a useful opportunity for me to listen and try to use my knowledge of this language. On the same day I met my very dear friend Daniel, a cargo bike constructor and an engineer from Bogota, Colombia, and we clicked immediately. I felt really happy to see his impression after the festival ended: “I have been accepted, helped, loved and protected by marvelous persons Jos Sluijsmans, Remco Kroeze, Ivan Podraza. Life is so beautiful and our home is one – the planet Earth!…” 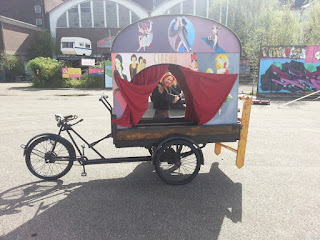 I’d also like to point out that I was given the opportunity to meet a Member of the EU Parliament Michael Cramer who is well-known for his cycling advocacy. Next to it, I contributed to the official magazine of the festival by writing an article about the potential of urban cargo bike sharing system in Europe. What’s interesting is that this magazine was printed on the same day of the conference on Saturday so that every participant could get it, therefore the media team had to be really fast when writing the articles and editing the magazine.

And having fun as well
Of course, volunteers had enough free time to enjoy different aspects of the festival, to listen to the lectures, to take part in the cargo bike race… I think I tested at least 80 % of the bikes that were offered there.

To me, the most interesting thing was “Cycling without Age” cargo bike, used by an organisation that helps elderly people by riding them around and thus increasing their quality of life. I’m looking forward to start volunteering for them in autumn!
Just look how many participants were there, and that’s even not all of them:
The festival was a huge success, attracting hundreds of visitors. And yes, it makes perfect sense that Nijmegen has been elected de Fietsstad (Cycling city) of the Netherlands for the year 2016 and 2017. The International Cargo Bike Festival, I am absolutely sure, plays an important role in that.
If you’d like to read about the festival itself, check the most famous Dutch cyclingblog, with three nice videos! 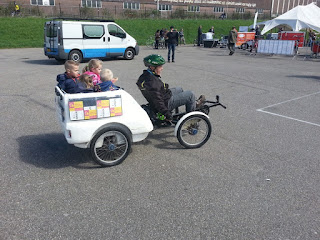