Nijmegen, the city of the International Cargo Bike Festival, is running for the title of European Green Capital 2016.
On 23 June 2014 the city of Nijmegen presented its plans to the jury in Copenhagen, Denmark.

Part of the presentation was a video in which the fight of the Dutch against the water and cycling and cargo bikes play an important role.


On 24 June 2014 the jury decided that Ljubljana, Slovenia, will be European Green Capital in 2016.
Congratulations Ljubljana! 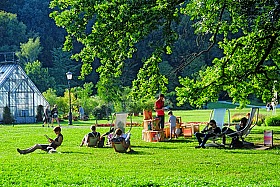