For some problems the solutions are easier than you can possibly imagine. E.g. consider the vast number of delivery vans that pollute inner cities, cause traffic jams and give city centres an unfriendly atmosphere. Part of those vans could easily be replaced by cargo bikes. Using those for urban distribution has three major advantages: reduction of CO2-emission, easier access to city centres and a far more pleasant city atmosphere.

Idealism for people suffering from nostalgia? Certainly not! In 2012 the company DHL Express replaced thirty of the approximately three hundred delivery vans by parcycles (a contraction of parcel and bicycles): specially designed transport bikes for parcel deliveries. This means a substantial cut in operating costs of € 430.000 per year, besides a considerable reduction of CO2-emission, and probably healthier employees.
By how much will emission be reduced? The following calculation was published in de Volkskrant (December 7, 2013) by journalist Bard de Weijer. It was based on the Mercedes Vito, about the standard van in the world of mail and parcel delivery. This van uses up to approximately 10 litres of diesel to every 100 kilometres. Let us assume that on an average run 50 parcels are being delivered and that a full run covers 50 kilometres (return trip to distribution centre plus delivery round); this would result in a fuel consumption of 5 litres of diesel per run. For this 50 kWh are used (calculation based on the energy density of diesel), resulting in a CO2-emission of 13.2 kilogram per 50 kilometres. If we bear in mind the thirty DHL vans, replacing those by bikes would result in an annual reduction of CO2-emission of 118,000 kilogram (30 vans x 300 days x 13.2).

Obviously, this must be considered in a wider perspective than just those thirty vans. According to CBS-statistics (Central Bureau of Statistics) more than 800,000 vans are driving around the whole of the Netherlands. If, as with DHL Express,  10% of these (i.e. 80,000 vans)  were to be replaced by transport bikes, this would result in an annual reduction of CO2-emission of 316,800  metric tons.

In my town of residence, Nijmegen, where 1% of the Dutch population lives, statistically speaking 800 vans could be replaced by cargo bikes. At this moment only a couple of dozen of company cargo bikes are riding around in Nijmegen. Therefore, an enormous potential for growth. It could reduce CO2-emission by as much as 3,168 metric tons per year.

And it could become a lot more, as well. CycleLogistics is a European project which runs from May 2011 to April 2014. The object in view is the reduction of energy consumption by substituting unnecessary motorized transport by transport using bikes. According to a survey by CycleLogistics no less than 50% of all current goods transport in (inner) cities could be done by bike. For the Netherlands alone this would add up to 400,000 cargo and transport bikes and a reduction of CO2-emission by 1,584,000 metric tons! 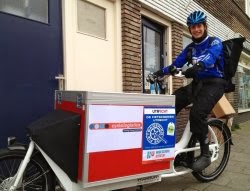 Fortunately, lots of ideas are brewing in the Netherlands in order to stimulate the use of cargo bikes. In view of this we organise the largest event in the field of cargo bikes, the International Cargo Bike Festival in Nijmegen on April 12 and 13, 2014.

If you are smart, you keep a keen eye on this development. Small, manoeuvrable, cheap in purchase and maintenance, clean and healthy. The future is to cargo bikes.

Many thanks to Peter Spoormakers for the translation from the original in Dutch
Posted by Jos at 10:40 PM